Hiring conditions in the trucking industry continued to gradually improve in September — hinting that the worst of recent labor constraints may be in the rear view mirror. For the economy as a whole, the unemployment rate dipped to 4.8 percent — just shy of full employment at historic labor market peaks (e.g., during the mid-2000s) while the labor force participation rate remained stubbornly flat.

Seasonally adjusted trucking industry payrolls increased by 2,500 to 1.50 million in September, up 3.6 percent from a year earlier, according to data released today by the Bureau of Labor Statistics (BLS). Job gains for August were also revised up by 1,900 workers. It was the fourth consecutive month of payroll gains for the trucking industry, but the slowest month since May. On a non-seasonally adjusted basis, trucking industry payrolls declined by 1,600 workers — so the industry’s net gains last month are in some ways a statistical illusion. They are now 1.3 percent below where they stood in January 2020, just before the Covid-19 pandemic, and in line with employment levels in summer 2018 during the last freight market peak. (The timing of the data collection from Sept. 12th through Sept. 18th means that Hurricane Ida, which disrupted supply chains across the eastern seaboard early in the month, likely had little to no distortionary effect on the results.)

The BLS payroll data do not include the important owner-operator (self-employed) segment of truckers and, as we’ve previously noted, may actually undercount employment during periods of elevated labor market churn or when employment growth is being driven by newly incorporated firms. Data from a separate Census Bureau survey — the monthly Current Population Survey — suggest that trucking industry employment for company drivers, office/support workers at trucking firms, and owner-operators is now at or above pre-pandemic levels. 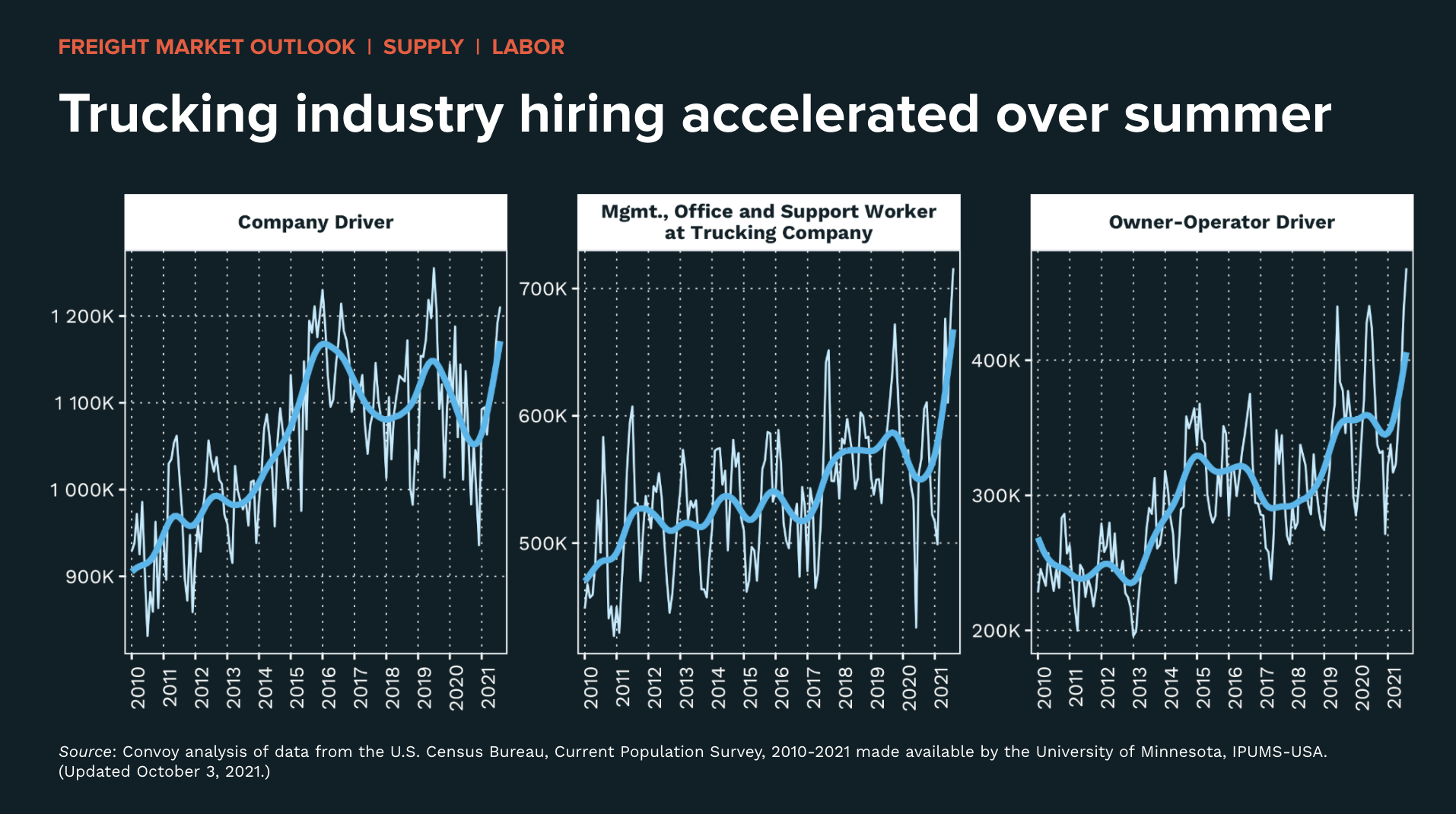 Forward-Looking Firms Hire for the Future, Not Just Today

Labor shortages have always been somewhat of a rorschach test for the priorities of the perceptor: Those seeking to hire see shortages around every corner and those seeking work inevitably see sufficient available labor for the right (usually higher) wage. Whatever one believes about the depth and longevity of the trucking industry’s recent hiring woes, it’s clear that the worst hiring constraints are past. It’s plausible that structural labor shortages may loom on the far horizon as a generation of older truckers ages toward retirement, but the most comprehensive views of trucker employment suggests that the number of active drivers is now near historic highs. While that employment level may not be sufficient to service the current extraordinary level of demand, it’s unlikely that demand will persist at current levels in the coming years — meaning that it’s entirely rational for trucking firms to hire to a level in line with their expectations of long-term business needs, not just today’s.

Employment at package delivery firms also increased (by 12,500 workers to 1.05 million seasonally adjusted) in September as the sector got an early start on holiday shopping prep. However, the share of package delivery drivers who are self-employed surged earlier this year and now stands at 5x its average for the past decade (around 20 percent as of August 2021, up from an average of 4 percent over the prior decade). As the last-mile/package delivery sector pivots more and more toward a gig economy model of employment, the BLS data will become less and less useful for assessing shifts in the industry’s underlying capacity.

Aaron Terrazas is Director of Economic Research at Convoy where he researches and comments on freight markets and what freight reveals about the broader economy. Prior to joining Convoy, Aaron was a Senior Economist and Director of Economic Research at Zillow. Before that, he was an Economist at the U.S. Treasury Department’s Office of Economic Policy in Washington, D.C. He was educated at Georgetown University and Johns Hopkins University. Aaron has been a runner since age 13 and is a sucker for all endurance sports.