On Friday, July 10th, Convoy joined Kevin on his webinar series, Positive Matters, to discuss the current economy in regards to supply, demand, and truckload rates. In Part one of the webinar series, Kevin Rutherford and Aaron Terrazas, Convoy’s director of economic research, look at data on  factory output, headwinds and tailwinds to the economy in the months ahead.

Aaron: We know that demand from customers is what moves the freight market, and supply of trucks responds. The first couple months coming out of the lockdowns were a story of surging consumers and lagging factories. If you look at the consumer side of the economy versus the factory side of the economy, retail sales on the consumer side bounced back a lot more quickly than the factory side.

Currently retail spending is around 90-95% of where it was pre-crisis, whereas factory output is 83-84% of what it was pre crisis. But if we dig beneath the surface on the factory side, what is holding down factory output?

If you think about two big buckets of goods –, durable goods versus nondurable goods –, we know that the household goods and the food never dropped as much in the depth of the crisis, but they haven’t rebounded as much either.

By contrast, durable goods dropped a lot, but have rebounded or are starting to rebound pretty quickly and more strongly. And I think some of the weaknesses we’re seeing in the nondurable goods side here has to do with the meat and dairy shortages we were seeing in May, and that should be bouncing back a little bit in the months ahead.

Tailwinds and Headwinds in the freight industry

Kevin: Have we ever had that kind of a savings rate in this country?

Aaron: This is historically unprecedented because we as Americans, are terrible at saving money. If you think about a 30%, 25% savings rate, that’s in line with the world’s historic savers: Japan of the 1980s, Germany of the 1970s, and the US during WWII.

Americans have been saving a lot of money, in part because of all the government spending we’ve been seeing, but also because they couldn’t go outside and spend it. Sooner or later, that is going to have to work its way into the economy.

We also believe real estate is another tailwind in the industry. For the past decade we’ve been urbanizing, people have been moving toward cities. I think that’s going to reverse a little bit and we’re going to see a lot of investment in bigger suburban or rural houses. That’s going to boost home builders. Home building is an activity that has generally been able to continue despite the lockdowns.

We anticipate that factories are going to take a hit for a long time. If you look at capacity utilization — i.e., how much are they producing compared to how much they could be producing — it is in the mid-60s [percent] right now. For most of the past decade, it was in the mid- to high-70s [percent].

Personal service productivity has also been impacted. Think about if you’ve gone to a doctor, or a dentist, or a barber in the past couple of weeks. They can’t see as many people as they used to. Maybe a doctor is seeing 10 people a day when they used to see 20. Sooner or later that’s going to have to be reflected in prices. So I think there could be inflation in personal services.

Aaron: And then finally the international context. As bad as it is here, a lot of countries are having a much worse crisis than we are. If you think about Brazil and Mexico, parts of Africa, those countries buy stuff from us, and are not going to be buying as much stuff from us for a while because their economies are feeling the pinch too. So I think those are some big headwinds on the horizon.

Kevin: I’ve been following a lot of companies, and they seem to be saying that people working from home are more productive, and this is really a good thing that companies may stick with. We’ve been a virtual company for a long time. We do have one physical location, and we’re down to one person at that location because everybody else is at home. What’s going to happen to the commercial real estate market, and what’s that going to do to the rest of the economy?

Aaron: That’s a great question, and I think it has to do with some of those real estate trends that I was talking about. Commercial real estate had been struggling even before this crisis because they had overbuilt a little in 2015, 2016. There was a lot of investment in office space, in particularly urban office space, and urban retail space. And if people aren’t going to downtowns to work, I think some of urban commercial real estate prices might dip. That’s going to hit property owners  in those areas, it’s going to hit all the small businesses –all the lunch places and stores that depend on office workers. So I think you’re spot on to point to that as a risk out there.

Kevin: Since we’re trying to stay positive, I guess the good news with that trend is a lot less traffic for our truck drivers.

Aaron: We looked at this in the middle of the crisis. The average speeds on highways for the truckers in our network — I think in LA rush hour — they doubled their speeds in March and April. Anyone who knows that area knows traffic can be pretty bad, so it doesn’t take much to double speeds.

Thinking about the future, because that’s obviously what we all care about. We all care about where we’re going. It’s only interesting to a certain point where we’ve come from. But when you look at some of the survey data about how businesses are doing and what they expect in the second half of the year, there are a bunch of survey indexes of new orders and shipments in the pipeline from manufacturers in Federal Reserve Bank districts.

There’s a mix, but some manufacturers — particularly in the mid Atlantic and Northeast — are feeling pretty good about the second half of the year. You look at the Philadelphia Reserve District — that has a big chunk of New Jersey with a lot of pharmaceutical manufacturers. Not surprisingly, they’re feeling pretty bullish. At the other extreme, the Dallas district has a lot of oil and gas extraction and refining companies. They’re not feeling quite as bullish for the second half of the year. So unsurprisingly, some sectors of economy are feeling good; others, not so much.

In general, when you think about where is freight demand coming from, a about half of freight demand comes from stable industries — things like food processing, things like non-durables — things that don’t necessarily go up and down with the booms and busts of the economy. People are always buying food. People are always buying toilet paper. Maybe in a crisis they shift from the rough stuff to the soft stuff, but you know, they’re still buying all those goods, and about half of freight demand is coming from those non-cyclical industries. 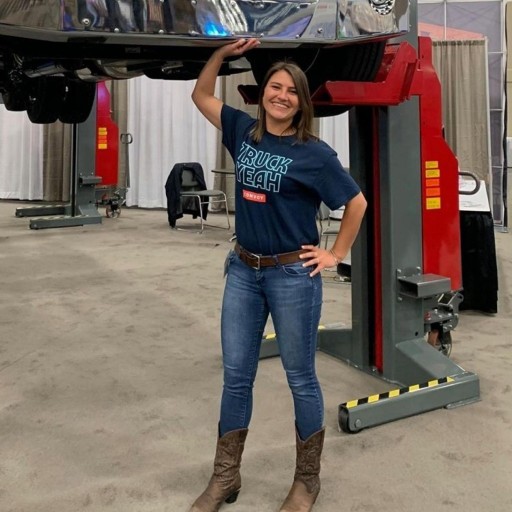 Macey Knecht
Macey works at Convoy as the team's Carrier Marketing Specialist. Before her transition to the marketing team, she helped lead the support operations and app engagement teams at Convoy. When she isn't speaking with carriers, she enjoys watersports, backpacking, and "sending it" on the ski mountain.